Spaying and Neutering - How it benefits your pet 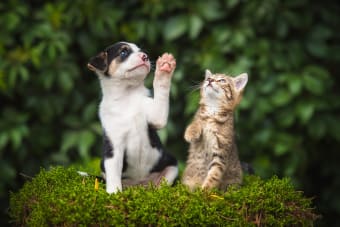 Here, our Clearlake vets explain the importance of having your animal companion spayed or neutered.

The Importance of Spaying and Neutering Your Pets.

The County of Lake and both the cities of Lakeport and Clearlake require that all cats and dogs be spayed or neutered. An unspayed female and her offspring can produce over 10,000 animals within seven years. An unneutered male can father thousands more.

What is spaying or neutering? The term neutering is correct for either a male or female animal but is usually used when referring to a male. Neutering is the removal of the testicles. The animal is given anesthesia, shaved, and prepped for surgery, a small incision is made and the testicles are removed. Spaying, a term only applicable to female animals, is an ovariohysterectomy. Like the males, they are anesthetized, shaved, and prepped for surgery, an incision is made and both uterus and ovaries are removed.

Most pets recover in 7-10 days after the surgery and must refrain from vigorous exercise, swimming and bathing during their recovery.

Once a human being takes on the responsibility of a pet, they are in control of the animal’s food, safety, and health issues and this includes being responsible for your pet’s reproductive ability. An animal on the prowl for its perfect mate is subject to more fights, more chance of contracting diseases, and more chance of getting hit by a car.

For females, some people believe that their animal should go through a heat cycle or pregnancy before being spayed. This is not true. It’s much safer for your pet, in the long run, to be spayed before her first heat cycle, which usually occurs between the ages of six and eight months, depending on the breed.

Having her spayed at an early age, before hormones develop, reduces the risk of life-threatening health issues, such as mammary tumors or pyometra (infected/pus-filled uterus and uterine horns).

A male animal can safely be neutered as soon as both testicles have descended, which is around four and six months old.

Some, believe that once they are spayed or neutered, their pet’s personality is going to change. This may or may not occur. If it does occur, the difference in behavior is usually for the better. Male cats that are neutered early don’t usually develop the habit of spraying to mark their territory. Male dogs are less likely to lift their legs to urinate on the furniture. Male dogs may also end up being less aggressive but, can still can be protective of you and your family.

If they are putting on more weight than they should, then cut back on the calories they are getting. And also make sure that your pet is getting exercise daily. Keeping them strong and trim will help them live longer and healthier lives.

If you have any questions or concerns, it is important to have this discussion further with your veterinarian.

Are you interested in learning more about the positive effects spaying or neutering your pet may have on their long-term health and behaviors? Contact Clearlake Veterinary Clinic today to book your next appointment.

Vaccinations and parasite prevention are the core of your pet's long-term good health.

We're always happy to welcome new patients to our animal hospital. Get in touch today!

Routine Wellness Exams for Your Pet

Surgeries To Restore Your Pet's Health

We use a range of surgical procedures to address serious health issues in pets.

Clearlake Veterinary Clinic is accepting new patients! Our experienced vets are passionate about the health of Clearlake companion animals. Get in touch today to book your pet's first appointment.