Why Foxtails Are So Dangerous for Pets 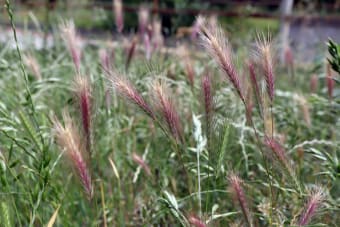 Here, a member of our Clearlake veterinary team explains what foxtails are and how serious of a threat they are to your animal companion.

I was doing some weed eating over this past weekend. Foxtails! Everywhere. Three city lots worth. I thought about how much my dog (an elderly Pomeranian, who is short on tolerance these days) despises me going over her with a fine toothcomb every time she comes in from out of doors during foxtail season. She’ll get a buzz cut as soon as it’s warm enough.

I thought about how much I’ve spent over the years having foxtails pulled out of eyes, ears, noses, and other assorted canine and feline orifices.

And then I thought about all those panicked calls we’ll get for the next five or six months. I swear in the dead of summer we could have one doctor do nothing but pull out foxtails.

The thing with foxtails is they are built for destruction. That nasty pointy front end that burrows in and the barbed body that drives it, engineered just so, that it isn’t going to allow the plant matter to back out on its own. That urban folktale about the foxtail that worked its way up into the brain from the eye…. I’ve seen it happen. And it wasn’t pretty.

We try our best to get patients who have gotten a foxtail in their eye in as soon as possible. Those nasty little weeds can do horrible things to the delicate tissue of the cornea. I’ve seen more than one pet lose an eye because of a foxtail. I have a fit if I get a foxtail in my sock. I can’t even imagine having one IN MY EYE.

Ears are another favorite place for foxtails. This seems to bother critters more than having them in their eyes. It shouldn’t but it does. The chronic head shaking AND … the pet (usually dogs) can end up with an ear hematoma on top of it if you don’t get it out. They just shake their heads so hard it breaks all the little blood vessels in the ear and the pina fills with blood. I get people canceling their appointments to dig a foxtail from out the ear because the pet has stopped shaking its head “so it must have worked its way out”. That one gets MY head shaking because I know that it hasn’t. It may be coated with dirt and ear wax so it’s not poking into the ear with such intensity, but trust me, it’s still in there. A foxtail can poke a hole in the eardrum or at least severe infection.

For dramatic effect, we present the nose foxtail. Sneezing so hard they smack their poor little head into the floor. A spray of blood for effect. Because of how foxtails travel it’s best to get these out as soon as possible. Thin and delicate nasal passages are no match for the evil foxtail. This one always requires anesthesia, because animals just don’t do so well with us sticking a surgical instrument in their noses.

Another thing foxtails can do is just embed themselves in the skin. And then travel. This happens a lot in feet. But we’ve seen them everywhere on the body. And those little suckers can move fast. A foxtail between the toes that are still sticking out ways is WAY easier to find and remove than one that’s made a tract and wandered up into the paw or even a leg.

So here’s what we’re going to do to keep our pets safe from foxtails this summer:

Has your pet encountered foxtails and needs a removal? Contact Clearlake Veterinary Clinic as soon as possible to book an appointment. Our vets will be more than happy to help.

Vaccinations and parasite prevention are the core of your pet's long-term good health.

We're always happy to welcome new patients to our animal hospital. Get in touch today!

Routine Wellness Exams for Your Pet

Surgeries To Restore Your Pet's Health

We use a range of surgical procedures to address serious health issues in pets.

Clearlake Veterinary Clinic is accepting new patients! Our experienced vets are passionate about the health of Clearlake companion animals. Get in touch today to book your pet's first appointment.